“Fools that will laugh on Earth, must weep in Hell”

Plot : The famous story of Faust who sells his soul to the Devil for twenty four years of knowledge, riches and experiences.

Thoughts: Although I knew the basic plot, I realized I had no idea how this would end. Several times Faustus has the opportunity to repent and wavers over his decision, and the appearance of the Good Angel and the Bad Angel would tempt him each way, with the Good Angel assuring Faustus it was not too late to turn back and receive God’s forgiveness. Would Faustus repent in the nick of time? Or spend eternity tortured in Hell?

Before Lucifer comes to claim his expected prize, we see Faustus in various adventures where he has the chance to make fools of both high and low – he steals away the Pope’s prisoner and crown by taking on the very appearance of a Cardinal, and tricks his would-be assassins and revenge-seeking merchants by detaching his head or leg from his body.

He also has Mephostophilis bring Helen of Troy back to this world to be his paramour, thus supplying the famous lines:

“Was this the face that launched a thousand ships,

and burnt the topless towers of Ilium?

Sweet Helen, make me immortal with a kiss.

…. Here will I dwell, for heaven is in those lips,

And all is dross that is not Helena.”

That last line is worthy of Shakespeare. She must have been an orright sort!

Source : I was on a week’s holiday and travelling while reading this, so it was easier to take the paperback copy of Marlowe’s Complete Plays with me, published by Penguin and edited by J. B. Steane. It cost me £2.99 at a church charity shop in Hay on Wye last year. Another canny buy!

I did like Mephostophilis’ turn of phrase when spell casting; for example when he turns Faustus invisible to let him play pranks on the Pope:

“Whilst on thy head I lay my hand,

And charm thee with this magic wand.

First wear this girdle, then appear

Invisible to all are here.

The planets seven, the gloomy air,

Hell and the Furies’ forked hair.

With magic spells so compass thee,

That no eye may thy body see.” 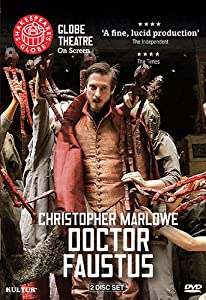 The boxset of Shakespeare plays as performed at the Globe Theatre, which I bought at a bargain online last year, includes this Marlowe play, with Paul Hilton as Faustus and Arthur Darvill (Doctor Who, DC’s Legends of Tomorrow) as Mephostophilis. Watched it tonight and enjoyed it immensely, (particularly the wonderful comedy of Pearce Quigley) although there is quite a bit of horror at the end to keep the little ones sleepless for a few nights.

Personal rating:  Fun (but that may be my twisted sense of humour). 7/10