“All hope abandon, ye who enter in”  Canto III (Longfellow)

A poet finds himself lost in a dark forest, unable to leave until the ghost of Virgil appears to lead him back to God via a lengthy journey through Hell, Purgatory and Heaven.

Source :  I used the Penguin edition (surprise!) translated by Dorothy L. Sayers who did a phenomenal job with her footnotes and explanations. The only negative was the omission of the defining images created by Gustave Dore, which I rectified by buying a hardback Kinickerbocker edition of the entire Comedy with his works translated by Henry Wadsworth Longfellow (!) (but unfortunately no footnotes). I’ll have to settle with having both versions in my library.

Thoughts : Wow! What a mind blowing act of world building. It took a long time to read this volume as after each Canto (3-4 pages) I just had to sit back and absorb. If only for my own record I include a summary of the levels which Dante and Virgil traversed.

After entering the Gate of Hell, first comes The Vestibule, which houses The Futile – those who refused to make a choice in life and therefore are doomed to wander aimlessly for eternity, unwanted by Heaven or Hell. Those destined for lower levels are ferried across the River Acheron (not the Styx – that comes later) by Charon.

Limbo (The First Circle of Hell) for the Unbaptized and the Virtuous Pagans (those who lived before Christ and therefore had no opportunity to choose). It was from here that Christ came to fetch Adam, Noah, Abraham and other worthy personages from the Old Testament to take back to Heaven. Hard luck on Aristotle, Socrates, Plato and Virgil for being born too soon. Also interestingly, this is the abode of Saladin.

Before reaching The Second Circle, each soul destined for lower levels confesses to Minos, who judges which level of Hell they are to be sent, and indicated by the number of times he wraps his reptilian tail around his body. Most levels have a ‘Boss’ to direct the punishment of the sinners or guard the perimeters. 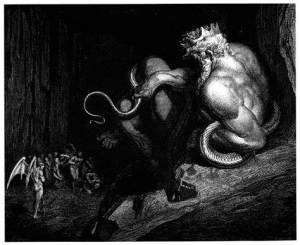 The Second Circle is reserved for the Lustful, who are blown around in the grip of a howling wind. The punishments in each level are symbolic of the effect or nature of the corresponding sin.

The Third Circle is for the Gluttonous who lie wallowing in mud, guarded and rended to pieces by Cerebrus the three-headed dog. These sinners are the self-indugent, moving on from the Lustful who shared their indulgences.

The Fourth Circle is for both the Spendthrifts and the Misers who are locked in eternal conflict, cursing each other and rolling huge boulders in opposing directions in an endless tourney. The travelers are then carried across the Marsh of Styx which constitutes the Fifth Circle, the abode of the vicious who thrash about in the mire, and the sullen who lie submerged under the surface, gurgling their hate. 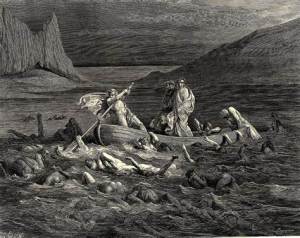 Many of the personages Dante meets on his journey are his contemporaries, which led critics to complain that Dante took this opportunity to attack his enemies in his poetry. Italy and particularly Florence was seething with tribal and family wars at the time, and Dante was directly affected, being sent into exile.

The Sixth Circle is for Heretics. Dante and Virgil dodge the Minotaur to reach the Seventh Circle, where the Violent dwell in a river of boiling blood. Virgil convinces the Centaurs to act as  guides and carry them across. Notably, the abundance of mythological beasts are all hybrids of the human form – the Minotaur, the Harpies, the Centaurs, Minos, even the winged devils and others to come.

They reach the Wood of Suicides, (violent against themselves) who having rejected their bodies in their act of self-destruction, have been transformed into withered trees and shrubs. To speak to them, Dante has to break a twig off their new form, allowing the sap/blood to flow and them to talk until the wound dries up. Next is the Abominable Sands where those violent against God, Nature and Art (Blasphemers, Sodomites and Usurers) live under constant burning fire falling down on them.

To access the Lowest Levels reserved for Fraud (Malice), Virgil calls on Geryon, a huge human shaped creature with paws, wings and a sting-laden tail, who flies them down to the Eighth Level. This Level is subdivided into ten trenches, concentric circles bridged by overarching stone ribs along which Dante and Virgil travel. The trenches are the abode of (i) Panders (pimps) and seducers, who are whipped by devils, (ii) Flatterers and others who misuse the power of communication (as Sayers points out in her footnotes, Dante had already reserved a place here for political propagandists, commercial advertisers and sensationalist journalists), (iii) Simoniacs (traffickers in holy objects, sacraments and offices), (iv) Sorcerers, fortune-tellers, astrologers and witches, (v) Barrators (traffickers in civic offices), (vi) Hypocrites, (vii) Thieves (who are transformed and reformed into the bodies of serpents and lizards – very graphic and horrible), (viii) Counsellors of Fraud (those who urge others into sin), (ix) Sowers of Discord (who are constantly attacked, chopped, split asunder and beheaded by demons with swords, only to be grafted together and attacked again), and (x) Falsifiers : perjurers, counterfeiters, and shoddy builders, who lie wearied and sickened by every kind of disease.

The bottom and Tenth Circle is kept for Traitors, buried in freezing ice : those who betrayed their family, their country, the bonds of hospitality and worst, their sworn allegiances. At this point the travelers have reached the Centre of the Earth, where Dis (Satan) stands frozen to his middle in the ice, his three faces and three mouths chewing on the bodies of the infamous traitors Judas Iscariot, Brutus and Cassius. Dante and Virgil climb down Satan’s body, and at some point down becomes up, and they emerge outside into the night sky of the Southern Hemisphere, at the foot of Mount Purgatory – the next part of their journey.

Favourite quotes/scenes: The entire structure and imagination is staggering. I liked the inclusion of the Greek mythology alongside the Christian base, and read many Cantos a second and third time.

The comic relief supplied between the more horrific sufferings is easier to dwell on, especially the devils saluting their Captain in Canto XXI:

“They by the left bank wheeling chose their route;

But first in signal to their captain each

Thrust out his tongue; and, taking the salute

Digressions/diversions:   Despite how much I enjoyed reading this book, everything seemed to distract me, which is more an indication of my attention span at the moment. I have been bushwalking, taking more wildlife photos, and even (gasp!) watching television.

Personal rating:  9/10. This is the fourth work this year I have given a 9. I must be getting soft.

Kimmy’s rating: Cerebrus is a little too scary to be friends with, and the place smells dreadful!

(from The Book of Key Facts, Paddington Press 1978)