Handsome young Gerald, Archdeacon of Brecon, accompanies the Archbishop of Canterbury Baldwin on a tour of Wales in 1188, to preach the taking up of the Cross, encouraging local men to enlist in armies destined for the Third Crusade. In the first book, he describes their travel itinerary and doings, the history and politics of the surrounding countryside, but most intriguingly various anecdotes of varying degrees of credibility. In the second work, Gerald (half Norman, half Welsh) discusses the best and worst national characteristics of the Welsh, including how to successfully invade and subdue them.

My copy was the Penguin Black Classic translated from the Latin by Lewis Thorpe.

Thoughts : It is really the anecdotes that enliven the Journey through Wales:

Gerald himself was an interesting and focused individual. Offered 4 separate bishoprics (two in Wales, and two in Ireland), he refused them all in the persistent hope that he would be given the bishopric of St Davids, which he sought all his life but failed to receive each time it became vacant, despite unanimous local support.

His comments on the Welsh in his Description of Wales are divided into two halves, listing their best and worst characteristics. Most striking is the advice on how to invade and subdue the Welsh, which is both militarily sensible and morally questionable, as Gerald was part Welsh and related to some of the most powerful families in South Wales.

“If it never comes to Wales, the nightingale is a very sensible bird” Baldwin, Archbishop of Canterbury, probably in an exhausted, unguarded moment (page 185)

Digressions/diversions:   Beavers have been reintroduced into Britain in recent years. This photo and article from 2014 shows them enjoying a midnight tussle in Devon. Huzzah!! 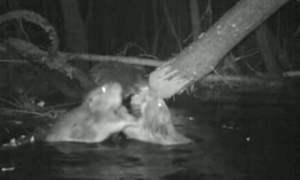 from The Book of Key Facts (Paddington Press, 1978)