Plot: A prisoner, once highly regarded politically, now incarcerated without trial for treason, awaits his execution. Lamenting his exile, fall from grace and abandonment, he is visited by the Spirit of Philosophy, who leads him through her arguments to regard money, honour, fame, power and bodily pleasures as false avenues to happiness, and the way to true happiness via God and virtue.

My copy was translated by David Slavitt and published by Harvard University Press, 2008.

I’m just not one for ancient philosophy. I feel that the philosophic arguments offered by Plato and Boethius are like a house of cards, ready to collapse if one pillar is knocked. There are so many assumptions that “A always equals B, and A always equals C, then it follows that B must always equal C” which include such broad generalisations until I lose confidence in the trail of logic.

I only persisted as far as I did because (a) it promised to be a short read (175 pages), (b) it is rated so highly by later authors, and (c) it is the last work of classical literature and it would have been a shame to miss it out entirely. Even then I could only last three and a half chapters out of five.

But as the prisoner himself says early on:

“What you have said is all rhetoric. It is a plausible series of high-sounding phrases … the moment they stop, he is again reminded of the grief that gnaws at his heart.” page 34

The chapter on Fortune introduces the image of the Wheel of Fortune, “raising men up and then dashing them down”

I did like the comment that a position of honour does not convey virtue; rather it is the virtue that the person brings with them that gives the office high regard.

“High office, when given to a dishonest man, does not make him worthy of it, but rather displays his unworthiness to the world.”    page 51

“Let him who hopes for fame consider the extent of the starry skies arching over our small planet. Can he think of shouting his name and proclaiming his pride into the icy distances looming above him?”   page 55

Other reading:  A very atypical Cadfael story by Ellis Peters, An Excellent Mystery displayed many of the practices I had just read from The Rule of Benedict. It also included one brother lusting after the younger novices as part of the story, which Benedict certainly did not mention amongst his guidelines for welcoming visitors to the order. While no doubt a realistic byproduct of celibate life in an abbey, I had to reread the initial scene to be sure I was interpreting it correctly. The whole story was very different from the usual cosy pattern of Cadfael that I started to wonder if this one had been co-authored. And yes, I had the mystery sorted half way through (if only I had this sort of success with Agatha Christie’s books)

I also read the first volume of Milly-Molly-Mandy stories, a children’s book series written and set in the 1920s, but I had never heard of. Recently republished to coincide with the 90th anniversary, these are charming stories redolent with little details of life in a small village between the wars, before cars were commonplace, and radio (let alone television) had not even penetrated daily life. The detailed drawings with so much background to the rooms and clothes were fascinating and I fell in love with them. 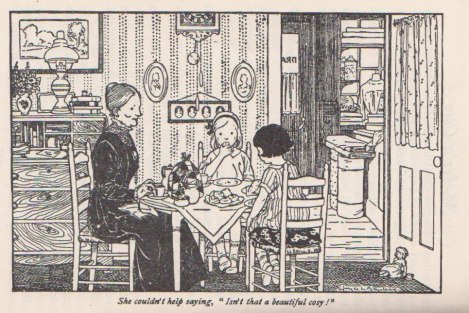 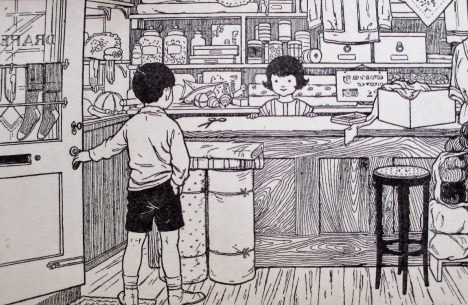