“Have I played my part in the farce of life creditably enough?”  Augustus, page 106.

Plot: Short biographies of the twelve men who ruled the Roman Empire in succession, starting with Julius Caesar (reigned 49-44 BC) through to Domitian (r. 81-96 AD). My version is the Penguin Classic translated by Robert Graves (ISBN 0140440720)

There was quite a lot of detail condensed into this small volume, including much about each Emperor’s characteristics and vices, even more than their actions as impacting in large on the Empire’s history.  For instance, little is said about Julius Caesar’s campaigns in Germany, Gaul and Britain, or the Civil War against Pompey, but we learn that he was ambitious and power hungry but cautious, even as a young man, planning several aborted coups. He was also very concerned with his baldness, wearing a laurel wreath on all occasions to help disguise it.

After his assassination, his grandnephew Octavius became the Emperor Augustus. He had a reputation for forgiveness except in cases of adultery, exiling his own daughter and adopted son. There is an amazing amount of personal detail : what he wore, ate and drank, where he slept and gambled, etc. This is true for many of the Emperors described by Suetonius.

Things really start going downhill with Tiberius, who professed early his reluctance to become Emperor, perhaps aware of his true nature : a debauching, thieving, miserly and paranoid recluse. He was succeeded (and probably poisoned) by his grandnephew Caligula, who had all Tiberius’ evil traits as well as insanity, cowardice, and a love of torturing and killing anyone who in the least offended him. Stories of him cutting people in half, wallowing in piles of gold, stealing and raping wives are standard. He slept with each of his sisters then banished them;  and talked to his horse, promising to make it a Consul of Rome … the list goes on.

After Caligula’s assassination, his uncle – the apparently slow-witted and elderly Claudius – became the top man. Made fun of since he was a child for being weak and stupid, and disregarded by Tiberius and even his own mother, he probably survived so long because he was not seen as a threat by Tiberius or Caligula. Yet he initially retained the respect of the people and the Knights, and was often cheered and saluted in public. He was handsome while seated and showing no emotion, but hobbled when he walked, and drooled, stammered and twitched when excited. But he was timid and obliging, being led in his imperial decisions by his wives and even his household staff.

After an unsuccessful and painful poisoning with mushrooms, Claudius was both fed poison-laced gruel and given a poison-laden enema. When none of these worked rapidly enough, he was smothered, at the command of his adopted stepson Nero.

Nero was particularly fond of music and singing, and impressed with his own virtuosity, would enter competitions regularly, even changing their schedules so they would be held in his presence. No one was allowed to leave during his performance, with the result that women gave birth during his renditions, and men pretended to be dead to be carried out. He also loved architectural wonders, and built a huge palace with a 120 foot statue of himself, a pool “more like a sea” and a landscape garden with “ploughed fields, vineyards, pastures and woodlands – where every variety of domestic and wild animal roamed”   (pages 224-225)

As well as his adoptive father Claudius, Nero also killed his adoptive brother Britannicus (poison), his mother Agrippina (although this took several attempts with various poisons and mechanical contraptions, before she was stabbed to death), his aunt Domitia Lepida (strong laxatives), wives Octavia and Poppaea (the latter he kicked to death while she was pregnant), and his step-son Rufrius (drowned by his own slaves). And of course, Suetonius accuses Nero of getting henchmen to start the Great Fire of Rome and sing as he watched it burn.

On the plus side he did expel all mimes from Rome.

Eventually it was too much, and rebellions arose. Nero had no children to succeed him, and one of the leading rebels Galba became the new Emperor. A harsh and ruthless disciplinarian, he broke his word to the Legions over bonus payments, and after only seven months, was assassinated. The next was Otho, initially one of Nero’s favourites, who was sent away from Rome so Nero could have Otho’s wife Poppaea (see above). He had hoped Galba would adopt him and make him Emperor but was spurned, and decided on a more martial approach. He lasted only three months at which point the armies in Germany preferred Vitellius, who proved a frivolous, cruel and gluttonous replacement. He lasted eight months before Vespasian started the new Flavian dynasty and brought back respect to the role of Emperor, rebuilding ruined and burnt houses, and reforming the Senate and the Equestrian orders. A modest and restrained ruler with a sense of justice and humour, he was naturally succeeded by his elder son Titus, who while initially loathed by the people, proved to be a generous and caring ruler, using his own wealth and power to provide relief to the victims of plague, fire and the eruption of Vesuvius.

The younger brother Domitian was jealous of Titus and constantly plotting against him, which Titus forgave. Domitian became Emperor and spent his first few royal hours catching flies and impaling them on pins. Things went downhill from there.

I could have happily continued reading Suetonius’ version of each Emperor, but his work stops rather abruptly with Domitian’s assassination, a rather scrappy affair with the Emperor and the killer wrestling about on the floor, fighting for the dagger.

If you fancy yourself as a Roman Emperor, here are a few choice quotes to practice:

“The omens will be as favourable as I wish them to be”   Julius Caesar, page 42

“GATHER SEASHELLS!” (command to the Roman army after lining them up in battle array with siege engines on the beach near the Channel)   Caligula, page 172.

“I have swords just as I have islands”  warned Caligula, upon banishing his sisters

Digressions/diversions:   Many.  I think I needed some serious classics downtime.

Personal rating:   Accessible and interesting, easier to tackle than Plutarch. 6/10

Kimmy’s rating:   Not enough banquets, and who could live on flamingo tongues? Yuk.

Also in these years:

Started to read through Agatha Christie’s Miss Marple books, with Murder at the Vicarage and The Thirteen Problems. Both re-reads but always entertaining.

The Moomins and the Great Flood, and Comet in Moominland. Finnish childrens’ books written and illustrated by Tove Jansson. I had never met the Moomins before, but vaguely recall seeing the illustrations – gentle hippo-like creatures who like adventures. Nice. 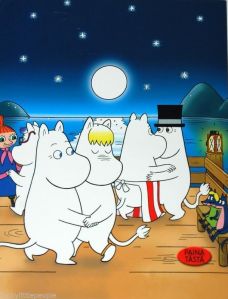