Content : The Book of Poetry, or Shi jing, is a compilation of 305 Chinese folk songs, hymns and odes, and was one of the six Chinese classics believed to have been used by Confucius to teach his disciples. The poems themselves are thought to have been composed between the 11th and 6th centuries BC. While the songs were largely collected from rural river valleys, the odes and epics were mostly written by nobles in the imperial courts.
My copy is a selection of 50 of the songs and odes with accompanying paintings from earlier texts.
My thoughts : A very difficult book to review. Until now, the books I have read have been translated into English by native English speakers. This selection of poems has been translated into English by a native Chinese speaker, and at first, the attempts to create rhyme seems forced and even a little desperate. I wondered how much of the natural original beauty of the poems I was losing due to the translation. But after a while, I started to understand the method behind the poetry, and the choice of English words and rhyming jarred less.

The volume I read was heavily weighted towards the folk songs, where there was a definite theme of hardship and sadness in the poems. The farm workers struggling with their lot in life, the jilted lover, the lowly soldiers ….

There is much nature symbolism and background to many of the songs, which provides the artists with the opportunity to create paintings for specific songs in different editions of the work through the centuries.

The odes, epics and hymns are generally much more interested in praising the kings and nobles, and without the beauty and sadness of the common man’s experience, these are far less affecting and interesting.

The cricket chirping in the hall 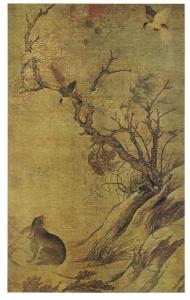 (from Past and Present)